The Wayland Depot opened its doors as a consignment craft shop in 1980, just a year before the train station’s 100th birthday.

Trains stopped running through Wayland in 1971 and the historic Gothic station, one of the few remaining on the old Mass Central Line, lay vacant.

Photo of Building with Caption: The Building: the Depot was built in 1881. The building is on loan from the Town is a National Historic Landmark. In February 1980, the building was totally rejuvenated. All upkeep is the responsibility of the Wayland Depot and all exterior work must have the approval of the Historic Commission.

Wayland has a unique collection of railroad buildings and foundations. Best known is the Wayland Depot, used by the non-profit gift shop of that name. The freight house, built the same year as the depot (1881) is next to the library parking lot. Lesser known is that Wayland once had a steam locomotive terminal, used from 1887 to 1917, located west of the depot.

The Town of Wayland owns both buildings and the land where the enginehouse and turntable were located. In most towns, when railroad buildings ceased to be used by the railroad, they were demolished or converted to business or industrial uses. In most places, foundations of railroad engine terminals were obliterated by construction of industrial buildings on the site. This did not happen in Wayland. The result is that Wayland has one of the most complete collections of railroad buildings and foundations in Massachusetts, and this has been recognized by the Massachusetts Historical Commission as unique and significant.

Volunteers put the shop on track

A group of Wayland residents, concerned about the future of the depot, obtained permission from the town to use it as a nonprofit shop where the many talented people in the area could consign their crafts. Profits were to benefit the town. Since 1980 The Wayland Depot has made generous donations to many organizations, including the Parmenter Food Pantry, The Wayland Community fund, Wayland Neighbor Brigade and Wayland Habitat for Humanity to name a few.

The shop, a member of the National Federation of Womens’ Exchanges, is staffed by approximately 40 volunteers, who each give about four hours per month. Membership spans all ages and gives volunteers, especially newcomers, a great way to make new friends while supporting the town. The Depot is run by a board of directors elected by the membership at the annual meeting each spring. 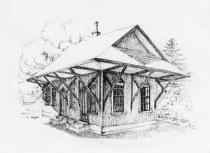